How to Feel Good More Often And Automatically 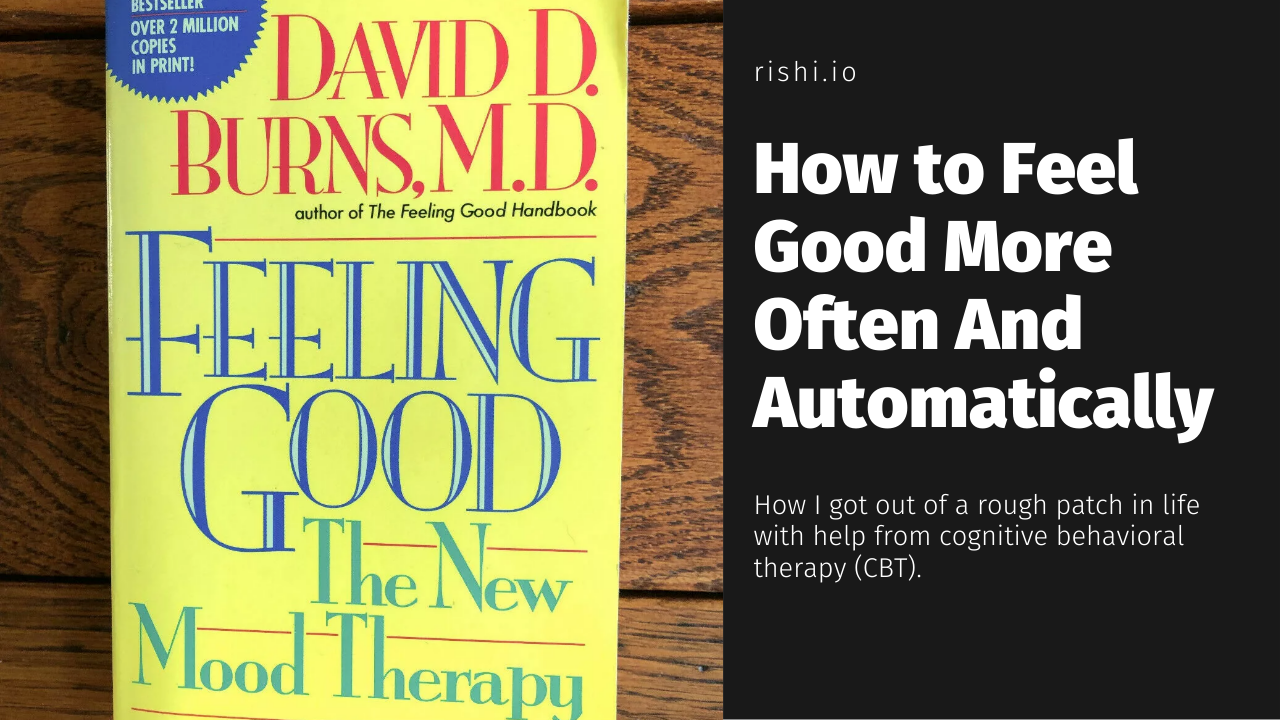 My 2020 was tough. It began with small nuisances, like moving out of San Francisco and moving back home. Then, it became sadder and sadder: my startup fizzling out; my dad getting a health scare; my grandpa passing away.

I had never felt so hopeless.

I could feel better for a day or two, but for months, I was always on edge, knowing another bad day was right around the corner.

Now, a kind of armor goes up when I’m about to dip into a negative episode.

Armor built from self-compassion and forgiveness and an arsenal of self-care technique.

And on this rainy Sunday, I bring you some of this arsenal from a very special book.

I present to you today, the #1 book therapists recommend their depressed patients:

This book is an excellent primer on using CBT (cognitive behavioral therapy) to feel better.

The book’s central idea is that your moods are caused by your thoughts:

These negative and untrue thoughts come in eleven patterns. Mostly, this article is about those patterns. Let’s get started!

I am not a substitute for professional help, nor is this book. Talk to a therapist too.

I was talking to my mom once when she was not feeling so good.

At one teary-eyed moment, my mom said “I’ve never been happy the last twenty years in America.”

At that statement, I morphed into my alter ego, who moonlights as an amateur CBT practitioner. I responded, telling her, “Well Mom, that’s not true the way you’ve said it.”

Yes I sound annoying but CBT is not about cheering people up. It’s about defusing negative patterns

I bring this up because my mom’s statement is an example of thinking in extremes and I showed her so. Reality isn’t black or white, nor is my mom’s experience all sad or happy. Reality is shades of gray. My mom had an automatic thought that was plain incorrect.

I also sometimes can’t help thinking in extremes. Here’s a thought I have:

“Quickapply, the startup I was working on failed. And so I’m a failure.”

But no, this isn’t accurate. First, Quickapply wasn't a complete failure. It was a partial success in many ways. I shipped a product outside work for the first time. I recruited two amazing cofounders. We built a tool students liked.

Even if we didn’t make a killing or get into Y Combinator or whatever, we didn’t fail.

Second, it’s not true that I or anyone else always fails—I’ve failed at some things in life and succeeded at others.

Do you see? This kind of thinking fires for me now when I notice a negative thought. Notice I'm using a rational response, not just a cheerful one.

You’re ready now. Let me share, by far, the most insidious thought pattern.

My manager had praised me: she said I did well and delivered a complex project. But I immediately dismissed it.

Because in my mind I’m a mediocre engineer and an imposter. And my mind refuses evidence that contradicts that.

I noticed this pattern in other contexts, too. Whenever I had a positive experience, or found evidence that suggested I have worth, my mind rejected it: “That was a fluke. It doesn’t count.”

See this example too:

According to Dr. Burns, discounting the positive results in “intense misery and an inability to appreciate the good things that happen.”

The antidote to this thought pattern? Believe people when they give you praise. Soak in evidence that affirms your worth as a student or coworker or boss. Don’t discount it as “oh, they’re just saying that.” There’s always a kernel of truth in there.

That’s two cognitive distortions so far: thinking in extremes and discounting the positive. The next 4 I’m going to rapid-fire at you. Ready?

Last month, a girl I was texting took ages to text me back. I read her mind and jumped to the conclusion she didn’t like me. I felt dull because I used the thought pattern of mind reading.

But it turned out, she did like me, and we had a fun date later.

Another time a friend of mine jumped to conclusions. She didn’t like her job and often vented to me about it. I asked if she could find a new job, or maybe switch teams at her company. “No,” she said. “I don’t know. In any case I’ll probably end up hating my new job too.”

Uh oh. Here, my friend played the role of fortune teller and told her own fortune: a negative outcome in all cases. She used a thought pattern called fortune telling.

I hate this pattern. People with it get stuck in lousy situations, because they can’t see a future in which they get out of it.

In high school, my mom didn’t let me go to a Mardi Gras event, and I blew up the significance of it. I felt devastated and angry for a whole day, when in hindsight, it mattered zero.

Have you ever blown up the significance of an event unnecessarily? Dr. Burns calls that one catastrophizing.

There’s personalization - this is when you attribute some negative event to be primarily your fault when it wasn’t. Classic example: Kid blaming herself for her parents’ divorce.

It’s also like Harry blaming himself for Sirius dying in the fifth book. Sure, Harry set the events in motion, but he had no idea it was going to turn out the way it did.

Have you called yourself any of the following words?

If you have, you’ve done what Burns calls labeling.

I notice a friend of mine will use these words, either in jest or to describe others. I worry about that, because if you have those words available to use, aren’t you more likely to use them on yourself?

Say a kid has a tenth birthday party. Say he has the perfect cake (Scooby Doo themed) and excellent presents (Yugioh cards) but one of his friends didn’t come to the party and he exclusively dwells on that.

The kid has fallen into the mental filter trap: picking a negative detail in a situation and fixating on it.

“I must go to the gym after work.”

“I must avoid pizza.”

Inevitably, one day I slip up: I wake up at 1pm, skip the gym, and order some pizza. Then, I get upset.

Here, I need to defuse my guilt. How? By accepting that circumstances change and that I can’t always do what I should.

Be careful of the should statements and expectations you place on others and the world, too. For example, “people should not slack on group projects.” For some, these can be a serious source of unhappiness.

(Aside: people feel angry when they feel they don’t have control over the situation. Somehow, their anger helps them feel more in control.)

Given that, here’s how to get better. Whenever you have a negative emotion, get in the habit of spotting the thought that caused it. Then, identify the negative thought pattern it maps to. Finally, brainstorm an alternative and more rational thought.

Dr. Burns recommends doing this process not in your head but in writing. He calls it the triple-column technique. I did this for two weeks in November 2020 and it made all the difference.

For more, buy and read Dr. Burns’ handbook. If you do the work in his book, you’ll come out a more resilient and happy person. I know I have.