How Not To Die 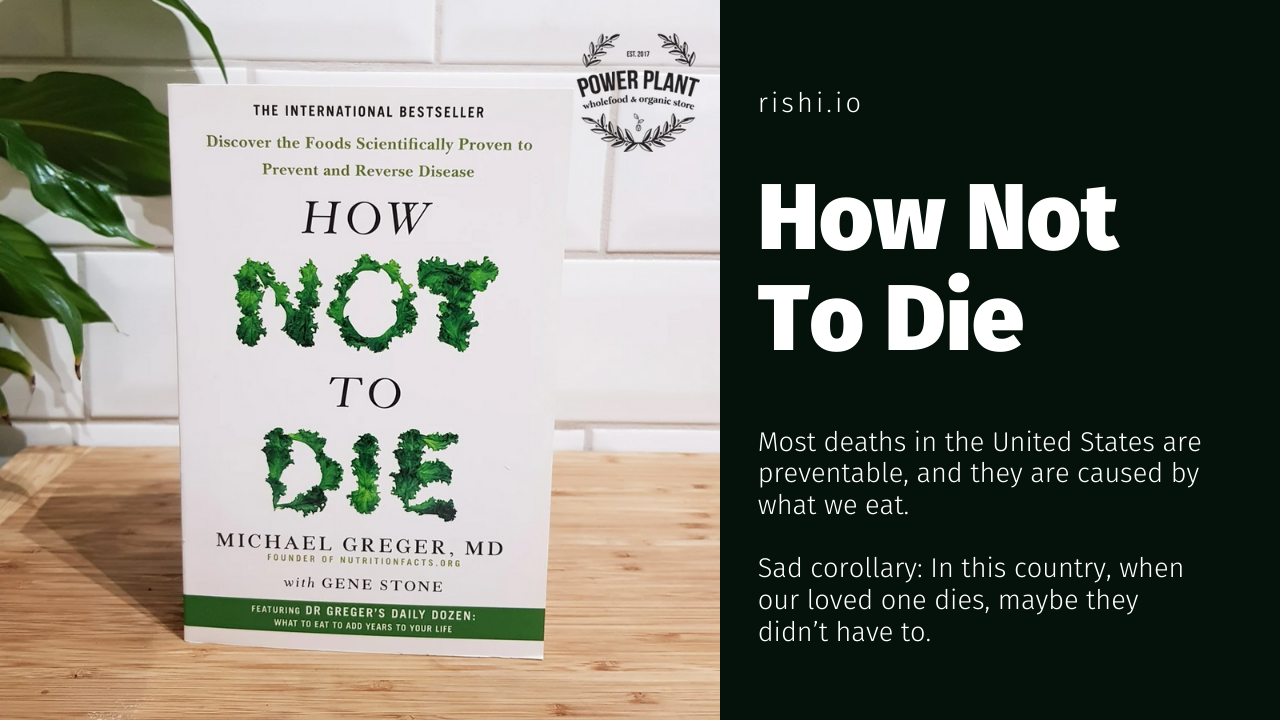 Most deaths in the United States are preventable, and they are caused by what we eat. Sad corollary: In this country, when our loved one dies, maybe they didn’t have to.

Unfortunately, we live in the Age of Degenerative and Man-Made Diseases.

This is reflected in the changing causes of death over the last century. “In 1900 in the United States, the top-three killers were infectious diseases... Now, the killers are largely lifestyle diseases: heart disease, cancer, and chronic lung disease.”

Now, if you could ask a genie to protect you from the fifteen leading causes of disease in America, would you? I would. A certain rapper once said, “I don’t wanna die today”. Personally, same.

There is no such genie (as far as I know), but there is our friendly neighborhood medical professional, Dr. Greger.

Dr. Greger in his book, How Not To Die, teaches us to prevent, treat, and reverse the fifteen leading causes of death in the United States.

Man does his research. Two hundred pages of his book are just citations 😍

He got his spark for the subject as a kid, seeing his grandmother recover from what her doctors diagnosed as end-stage heart disease. Fortunately, she found the clinic of an early pioneer in reversing heart disease, whose program (and diet!) saved her life.

His book is split into chapters on preventing the leading causes of death (e.g. “How Not To Die From Heart Disease”), and chapters on what he calls “The Daily Dozen”—the dozen foods we should eat daily for health and longevity.

In this article, I summarize the first three of his fifteen chapters on preventing leading causes of death:

I end by sharing the following:

If you get bored at any time, please scroll to the Daily Dozen :)

How Not To Die From Heart Disease

Coronary heart disease kills more Americans annually than all our past wars combined. In other words, every year, we lose four hundred thousand Americans to a preventable threat.

The killer? Pockets of cholesterol-rich gunk in the walls of our arteries called plaque. For most of us, the plaque accumulates in the coronary arteries, the blood vessels around the heart.

Over decades, the plaque narrows the space for bloow to flow. If the plaque ruptures, a blood clot can form, limiting blood flow and causing a heart attack, then damaging or killing the heart.

Which brings us to the only critical risk factor for plaque buildup: cholesterol, specifically elevated LDL cholesterol in your blood.

Dr. Greger paraphrases the editor in chief of the American Journal of Cardiology and tells us how to reduce our LDL cholesterol levels.

trans fat, which comes from processed foods and naturally from meat and dairy;

In other words, to avoid heart disease, avoid animal products and processed junk. Do like the rural Chinese and Ugandans do: follow a (traditional) diet based on whole plant foods.

You can find amounts of trans fat, saturated fat, and dietary cholesterol on any old nutrition facts label:

To know how you’re doing, get a blood test, which can tell you your cholesterol levels.

There is a cholesterol level that appears “heart-attack proof”:

An LDL around 70 mg/dL corresponds to a total cholesterol reading of about 150, the level below which no deaths from coronary heart disease were reported in a famous study.

In summary: avoid heart disease by lowering your LDL cholesterol levels, by cutting trans fat, saturated fat, and dietary cholesterol from your diet, by eating plant based.

How Not To Die From Lung Disease

Unsurprisingly, smoking is the critical risk factor for both lung cancer and chronic obstructive pulmonary disease (COPD), which together account for three hundred thousand deaths a year.

Dr. Greger shares a story in which he had to watch a patient he couldn’t save choke to death from lung cancer:

He was wide-eyed, gasping for air, his hands clawing at the bed. The cancer was filling up his lungs with fluid. He was being drowned by lung cancer.

Think about that for a second. The man suffocated to death. That gives me chills. We need to take care of our lungs.

The chapter also explores how broccoli and turmeric can help fight lung cancer, and cancer more generally. This is why in his Daily Dozen, Dr. Greger includes broccoli and highlights turmeric.

First, we learn compounds in broccoli—and other cruciferous vegetables—have the potential to suppress the spread of cancer cells.

We need clinical trials to verify the above further, but in the meanwhile, work them into your diet anyhow.

In summary: Don’t smoke, and to prevent cancers, consider cruciferous vegetables and turmeric.

How Not To Die From Brain Diseases

The two most serious brain diseases discussed are stroke, which kills 135,000 Americans a year, and Alzheimer’s disease, which kills 85,000.

Both of these diseases have the same root cause as heart disease: cholesterol.

On the other hand, Alzheimer’s is more of a mind attack. With Alzheimer’s, plaques made of a substance called amyloid, may develop in the brain tissue itself. However, cholesterol is thought to seed the amyloid plaques.

Thus, follow the recommendations from earlier, to lower your LDL cholesterol by eating whole plant based foods.

In addition to those recommendations, Dr. Greger shares how fiber, potassium, and antioxidants can all further protect the brain from brain diseases.

Fiber and potassium are pretty dope. But I’ll zoom in on antioxidants.

It turns out, antioxidants are our line of defense against a phenomenon in which oxygen molecules grab stray electrons and turn into the molecular equivalent of the Hulk.* The Hulk wreaks havoc, causing oxidative stress.

Oxidative stress is thought to be why we all get wrinkles, why we lose some of our memory, and why our organ systems break down as we get older. Basically, as the theory goes, we’re rusting.

*To be more precise, oxygen molecules turn into dangerous free radicals, not the Hulk.

Slow this oxidant process by eating food with lots of antioxidants. Food with antioxidants, when exposed to oxygen, doesn’t oxidize, or brown, very quickly. For example, citrus and mangoes and grapes all brown slowly and have antioxidants. On the other hand, apples and bananas brown quickly, and have few antioxidants.

To bring it back to stroke: “Swedish researchers followed over thirty thousand women for a dozen years and found women with the antioxidant-rich diets had the lowest stroke risk.” Antioxidants protect the brain.

Dr. Greger’s Daily Dozen and How I Use It

Decades of research compiled into one simple framework 😍

Here are some tips I would give myself earlier on my health journey:

This is just what works for me. I tend to eat meat when I eat out.

Criticisms of How Not to Die

There are many conflicting voices in the nutrition debate. I don’t know who to believe. Should I eat meat or not, lol.

A nutrition blogger Denise Minger (formerly vegan, still mostly plant based, which is interesting) took issue with some conclusions in How Not to Die as well as The China Study. Notably, she did not take issue with conclusions in the heart disease chapter, which I feel is most crucial.

Peter Attia (frequent guest on The Tim Ferriss Show) supports eating meat but doesn’t exactly make a case for it explicitly. Instead, he points to his series on “Studying Studies”. Something about observational epidemiology. Problem is, his articles are not written for the layman 😿 so I don't follow his reasoning yet.

In any case though, I feel the line of thinking in “How to Avoid Heart Disease” seems correct. Cardiologists agree on the role of LDL cholesterol in heart attacks. That’s enough for me to reduce my meat intake.

Now, of all that has been said on nutrition out there, I like Michael Pollan’s adage best.

It’s brief—only 7 words—and not too provocative.

Eat food, mostly plants. Not too much.