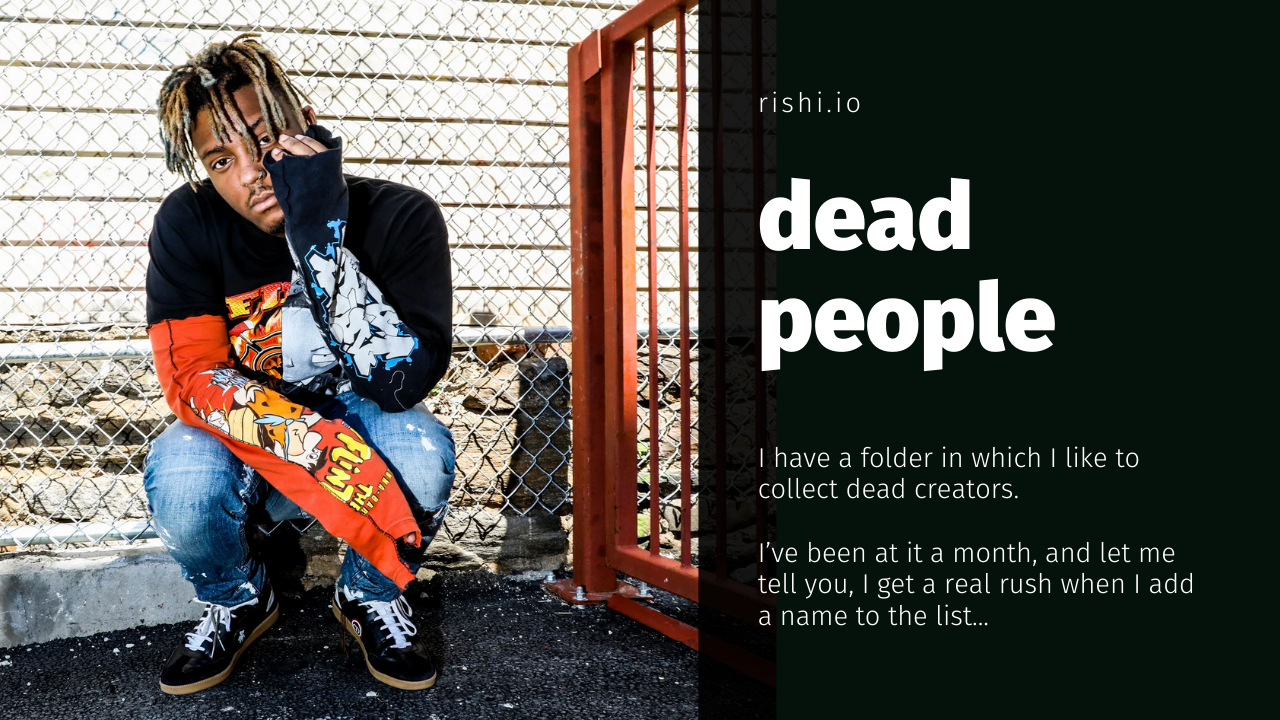 I have a folder in which I like to collect dead people. I’ve been at it a month, and let me tell you, I get a real rush when I add a name to the list...

I have a system. I read excellent books, watch terrific movies, and listen to absolute bangers.Then I check if their creators died after 2000.

Here's the current list, in no particular order. If I had time, I would have also listed Robin Williams, Ursula K. Le Guin, and Terry Pratchett.

Each one of these incredible creators blew me away:

Godfather of lofi hip hop and chillhop. Japanese producer & DJ.  Died in 2010 at 36 in a car crash. Goddam. Check out Feather and Luv(sic) to start. Also check out the Samurai Champloo soundtrack. Every year I keep coming back to Nujabes when I want to feel alive.

One of the most important and influential comedians of all time. Died in 2008 at 71 of heart failure. Stephen Colbert, Bo Burnham, and Jon Stewart all claim him as an influence. His top five standup routines are probably

"Without question the nation's most prominent and influential film critic". Won a Pulitzer Prize for his film criticism in 1975. Died in 2013 at 71 of cancer. Writer Derek Sivers wrote a moving tribute to him. Please read it. Then check out his list of The Great Movies, his collection of films he felt were the best. I've watched seven so far. Also check out his London walking tour.

Ebert was unable to speak or eat properly for the last ten years of his life (because of his cancer). But he still watched movies and wrote reviews. And regularly entered the New Yorker cartoon caption contest. I actually think about this fact all the time. It makes me feel better about aging. Basically he gives me faith that even if later the Universe takes a lot away from me, if I can read/write & also listen to music, my life can still have real joys.

The country's best-selling poet for multiple decades & the only poet to have made me cry. Won a Pulitzer. Died in 2019 at 83 of lymphoma. She said poems are special because they are small enough to memorize and hold in your heart. Her most popular poem is The Summer Day and it is so wonderful. I plan to frame it in my apartment. Also check out her full poetry collection Devotions.

Academy Award winning screenwriter. She wrote the screenplays for the classic romcoms: When Harry Met Sally, Sleepless in Seattle, You've Got Mail. Which are SO GOOD. Died in 2012 at 71 of pneumonia, as a complication of leukemia. Also published essay collection I Feel Bad About My Neck. It was a No. 1 best-seller + sold millions of copies. She is incredibly funny.

Man, I love these creators. I wish we could have still had them alive today 😢